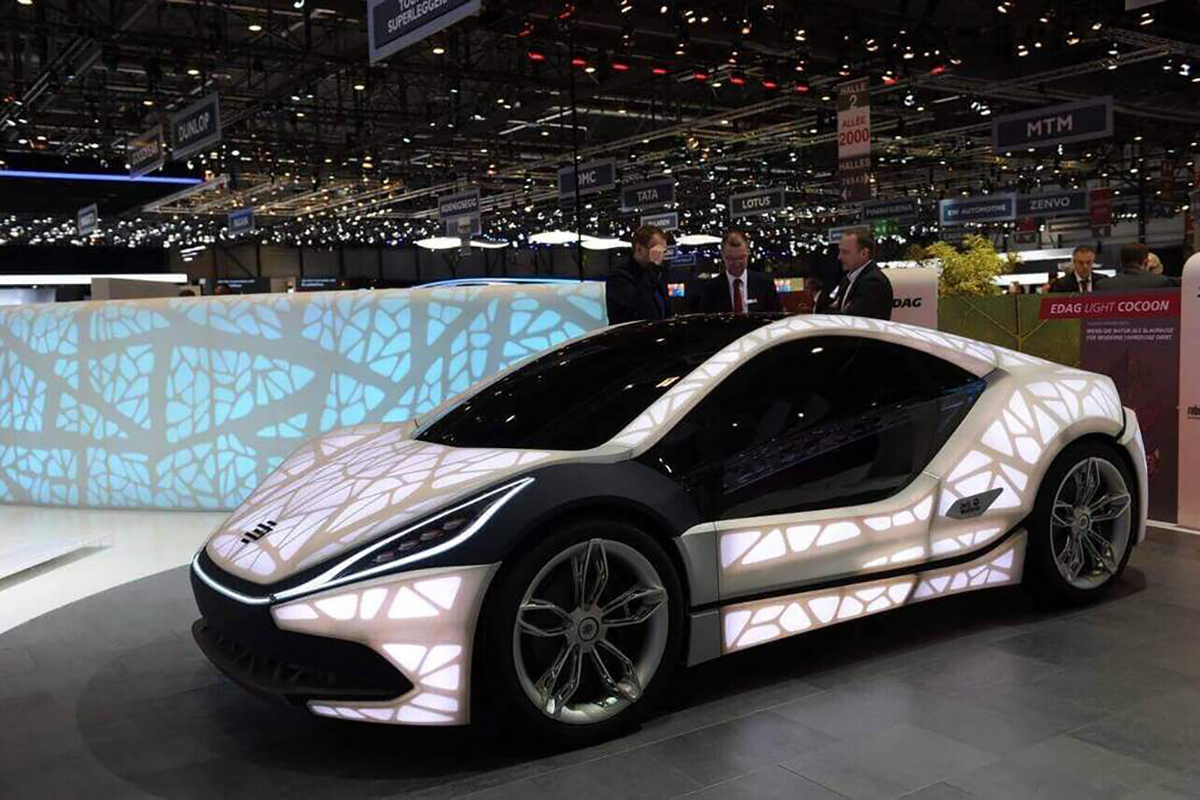 Now that we discussed 3D printing your pizza, airplane and your heart, let’s cover a topic you are probably more familiar with – 3D printing in the automotive industry.

Let’s take a look at some examples of companies that are using additive manufacturing in the automotive industry, starting with prototypes and moving into fully printed vehicles.

The 4ekolka is a 3D printed car that uses additive manufacturing to reduce its weight to create a more economical vehicle. The prototype cost is only $12,000. Although it is not meant for high performance as it can travel only up to 34 miles per hour, it is intended to get a person from point A to point B using the streets. It was made based on a European study that most drivers drive only 31 miles per day.

The Daihatsu Copen uses FDM to create some aspects of customization such as decorative Effect Skins, which uses Direct Digital Manufacturing. Stratasys made these Effect Skins in ASA thermoplastic.
Image Source

Kabuku, a 3D printing company in Japan, printed the body for the Micro Commuter using FDM in about two months. The exterior panels and luggage space were 3D printed. This 600 kg vehicle only has space for a driver.
Image Source

Are you a fan of Elvis? Well, this BMW 507 belonged to Elvis. BMW restored it using additive manufacturing to replace parts, such as, the door handles and window winders.
Image Source

If you follow up on additive manufacturing in the auto industry, you’ve probably heard of the Strati. Local Motors created it with high intentions of reducing weight and the number of parts to save money. The whole vehicle is only composed of 40 parts! This car was fully printed in only 44 hours! Most of the parts including the chassis, seats, body, and dashboard were 3D printed from carbon fiber-reinforced thermoplastic. There were a couple of parts not 3D printed such as the wheels and the battery, but I think it’s safe to call it a 3D printed car.
Image Source
Local Motors also created the LM3D. They are unique because they use collaborative design to create a single, 3D printed piece. 75% of the original LM3D was 3D printed including the chassis and body panels using ABS plastic and carbon fiber material.
Image Source
This 3D printed bus, also known as the Olli, is electric, autonomous and can fit up to 12 people. Most parts are made in local microfactories and can be produced within 10 hours and assembled in 1 hour. The bus was 3D printed on a Cincinnati additive manufacturing machine (BAAM) developed at Oak Ridge National Laboratory. To find out more about Olli, see here.
Image Source

Using SLS, EGAG’S Genesis encompasses the concept of a turtle’s shell to reflect their idea of safety. Additive manufacturing allowed for complex geometries for this car. EDAG assesed the following additive manufacturing processes: SLS, SLM, SLA, and FDM. Through their research, they found FDM to be promising for the future of additive manufacturing. EDAG said, “Unlike other technologies, FDM makes it possible for components of almost any size to be produced, as there are no predetermined space requirements to pose any restrictions. Instead, the structures are generated by having robots apply thermoplastic materials.”
Image Source
Using SLM and SLS, the Soulmate was born. The car is lightweight and uses the internet of things to connect physical parts with electronics and sensors. The exterior of the car is 3D printed, which explains its lightweight design.
Image Source
The Light Cocoon measures 19 grams per square meter. It has a leaf-like outer skin to symbolize nature. The material is made from Jack Wolfskin, which is four times lighter than standard copier paper.
Image Source

Only 340 Lotus 340r cars were produced between 1999 and 2000. This popular collector’s car found an issue – obtaining spare parts. CIDEAS created its models of parts using 3D scanners (Geomagic Capture), making it possible to produce more than 40 replacement parts. Each part was created in the material best suited for its needs. For stereolithography, 3D Systems iPro 8000 Systems was used, and for selective laser sintered parts, they used 3D Systems sPro60HD/HS.
Image Source

Did you know that the first functional 3D printed excavator in the world exists now? It was printed with a metal alloy. The parts that were 3D printed were the following:

How 3D printing is redefining the auto manufacturing